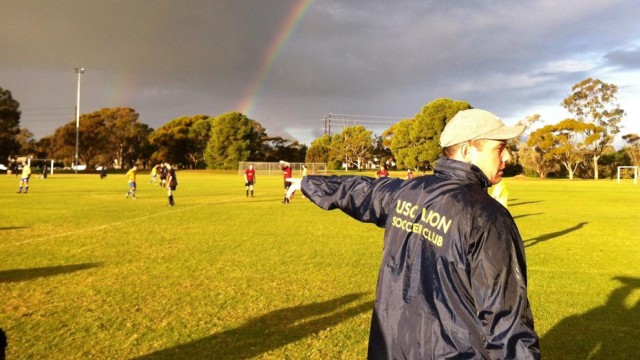 This week to mark the midway stage of the season we hear from our A Grade coach Dael Redmond on how the season has gone so far.

We’ve reached the half way stage of your first season back at the club, how has the first part of the season been for you so far on a personal level?
Challenging, it’s been great coming back to where it all started. Working with Jase and the lads has been good fun. I’m constantly learning and adapting to the different culture and environment. We are improving every week which is the most pleasing thing.

From a football perspective how have you rated the performances of the A Grade so far and what have you seen that’s pleased you about their progress?
I don’t think the table does our performances justice. Currently bottom but 4 points from 3rd just says how tight this league is. The last 7 weeks (4 wins, 2 draws and a narrow loss to SPOC) we have turned our form around, but we mustn’t get complacent.

Who out of the new players to join the club has stood out for you.
Tough question…Young Peter Alahiotis has probably been the most consistent. He was a lad I was fortunate enough to work with at Junior level, so I knew of his quality. Young Kirby Fajardo played his best game for the club on the weekend and is getting stronger each week. Mick Harvey missed the early part of the season and is an important member. Antonio Fedele has impressed me stepping up into the A grade squad. Our newest signing Tony Parisi is a winner and gives us real experience. Jamie Hart is also an excellent signing, plenty of experience and gives Zahid real competition between the sticks.

I covered a few of them there but I think they have complimented the existing players really well. The boys all get along and morale is good!

As for the other grades how do you rate the depth at the club and the performances of the other teams?
Joe has been doing an excellent job. It’s never easy being Reserve coach, especially with your squad changing each week. They’ve taken points from BOSA this year which no one else has done. It seems we have an ongoing/revolving list of unavailable players each week, but that’s to be expected at any Amateur club. I dare say if we got everyone on the park we’d be extremely competitive in the top 3 grades.. Both the A’s and B’s are in the last 16 of the Cup. Only 6 other clubs in the SAASL can say they’ve achieved that this season.

John Young and the C’s had an excellent preseason and finally notched up their first win on the weekend. As the squads get stronger I’m sure they’ll only get more results the second half of the year. Johnny is a great lad so I was very pleased for him.

Maz is the D Grade club legend. He has the hardest job of all traveling to different grounds but keeps the morale amongst the group good.

What have been the stand out moments so far for you this year?
Our first league win (4-1 win away to BOSA) was an amazing feeling. We’d been playing well but just hadn’t been getting the results. BOSA have been the benchmark of the competition for a long time, so the win gave us a lot of belief and confidence.

The 2-0 win at the previous weekend was crucial to keep us in touch with the teams above us. How did you rate the performance and what do you think the team can take from that result moving forward?
Massive result in the context of our season. We weren’t at our best but ground out the result and kept our first clean sheet in the league. I don’t think I’ve seen a league table as crazy as this at the halfway point. Bottom, but 4 points from 3rd, our goal difference is also reasonable when comparing to others. The win sets us up for another big game against Modbury this week.

What are you hopes and expectations for the remainder of the season? Have you got a target in mind of where you’d like the ‘A’ grade to be aiming to finish and how deep do you think we can go in the cup?
The old cliché one game at a time. Given where the club has been previous years survival is the obvious goal.  However, the belief is we can finish the season mid table. A sneaky little cup run would also be nice.

Funniest moment?
There’s been a few…Billy Bannard deciding to train in board shorts. Begins chafing so finishes the session off in his Reg Grundies. I don’t think the boys could quite believe it.

Worst miss of the season so far?
Billy Bannard against Munno Para in the Cup, literally a yard out, hit the post.

Worst player excuse for missing training or a match?
“Mums surprised us with a wedding, so I can’t play today” The call came through an hour before warm up too. He provided a heap of photos and even rocked up to our gent’s night afterwards in a suit. A lot of effort went into that excuse Antonio.

Who’s faster Usain bolt or Kirby?
Jake Stapenell – I would love to see the two over a 100meters.

Who’s the better boxer Antony Mundine or Jimmy?
The Bruiser from Birmingham.

Who would’ve made a better ‘Thor’ out of the 2 Gniadek brothers?
When the opposition heckles him as Thor you know they are very similar. Zac.

And finally, who’s your tip for the World Cup???
Wow tough one…. heart said Brazil, head says France…unfortunately I don’t think football is coming home, but it’s been a strange World Cup so who knows.