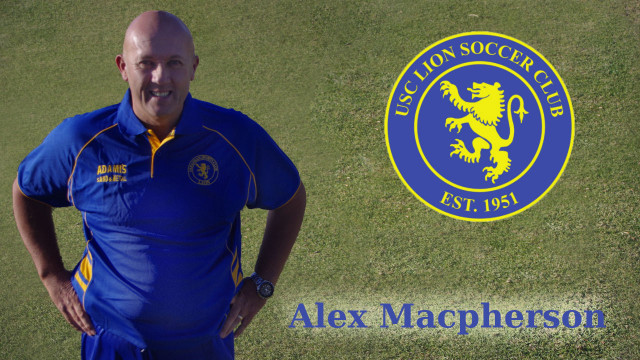 USC Lion is proud to welcome Alex Macpherson to Grange as the first team coach for the 2017 season.

Club President, Marc Crossman has been full of praise towards the new appointee.

“We’re all thrilled to have Macpherson here. He’s shown a great attitude in training so far and is getting the best out of the lads,” said Crossman.

After tough negotiations it was USC’s organisation and professional setup that attracted the Scot to Grange.

“I had an offer for another club, but they weren’t organised. However the first point of contact here was quite professional and very organised. I got a good vibe from the club. I arrived at Grange on the first training night and had about 50 guys out,” said Macpherson.

Macpherson is excited to be working with USC after coming from Scotland where he was the youth team coach for Ayr United who compete in the Scottish Championship.

“It feels absolutely fantastic to be here. We’ve got a great bunch of boys. We’re going to have a decent squad of first team players. You’ve got players who can step up from the reserves to the first team and still do a job for us.”

Having a month of pre-season under the belt, the new gaffer is liking what he’s seen at Grange.

“The players have a great attitude, it’s absolutely wonderful. I’ve never hammered so many boys at training and they thank you for it. It’s a big compliment to me and to Jack (Kleinig). Jack has worked his buns off with this pre-season. Jack really wants to get them running and get their fitness up.”

After an internal match this week Macpherson believes the squad is showing good depth.

“I was impressed with the squad. The way the reserves passed the ball around was impressive. They look very comfortable on the ball. I’ll be making sure to come out and watch them on the weekend.”

With limited exposure to the SAASL leagues, Macpherson has still done his homework and finding some areas that need to be improved.

“I’ve been looking at the match history and we don’t score enough goals. When you’re playing amateur football you’ve got to score 3-4 goals a game. I don’t care if we get beaten 10-9, I’d be delighted. I’d rather that than a boring 1-0. To me it’s all about going out there and scoring goals. We’ve got our strikers taking shots and scoring goals. I’m trying to drill into Zac (Gniadek) and the midfielders to get a bit greedier.“

After USC Lion winning the Division 3 title in 2014, achieving promotion from Division 2 in 2015 and impressive debut season in the Premier Division, Macpherson doesn’t feel the pressure to set targets.

“If you’ve got a good bunch of boys, you’re going to have a good set-up. I can only do so much as a coach, if we win games it’ll be all down to the players.”

Round 1 kicks-off on 1st April with fixtures yet to be confirmed.